This manual method made it possible for operators to accidentally include defective parts in shipments to the customer. Engineers concluded that an automated inspect and pack-out cell would significantly reduce the possibility of defective connectors being shipped to their customer. 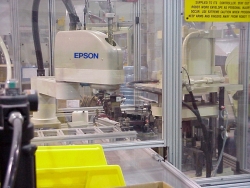 Flexible Automation, an automation equipment builder based in Burton, MI, designed and built a workcell that automated the handling and inspection routines. The workcell is equipped with an EPSON TT8800 robot and a simple pneumatic gripper. The robot picks up a connector from an incoming conveyor and loads it into a blanking press. After blanking, the part is transferred to a station that performs an electrical test. Next the part is moved to an automated vision inspection station that checks for flaws created during the injection molding process.

After visual inspection the robot makes the connector with a date and shift code for manufacturing traceability.

The final step is packout. Good parts are loaded into a shipping container and defective parts placed in reject chutes, segregated by their test results. As a result of the significant benefits achieved from the first workstation, the Tier 1 supplier ordered 5 more identical stations.